Things to Do in DC for Memorial Day - USA Guided Tours

Things to Do in DC for Memorial Day

Memorial Day Weekend has always been an unofficial marker that summertime is near. But this year is extra special because there is an optimism in the air that we have not felt in a long time. Slowly and cautiously, many indoor spaces are reopening, and outdoor events are returning just in time to celebrate Memorial Day.

Falling on Monday, May 31 this year, this holiday pays homage to the military service members who have sacrificed their lives while serving in the military. Events frequently take place annually throughout the district for the entire weekend, however last year all events were either canceled or moved online. Given the recent improvements in the COVID-19 situation in Washington DC, most capacity restrictions will be lifted 10 days before the holiday, meaning that in-person events will return.

DC Omnibus: Your Guide to Touring the City 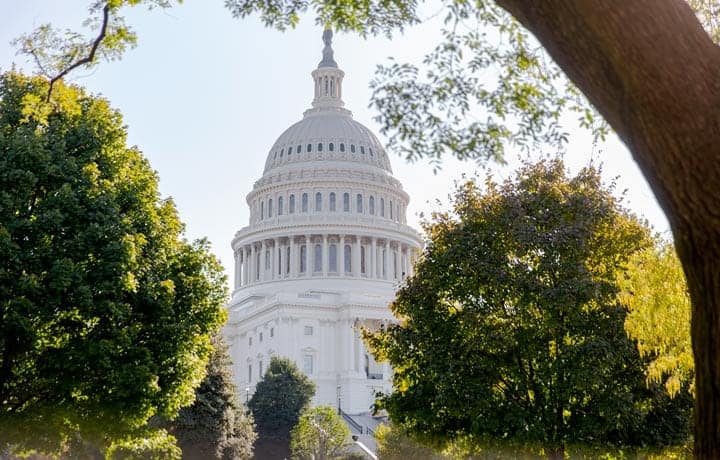 There’s no better place to celebrate Memorial Day than in Washington DC, one of the richest places in the States for wartime history and military memorials!

Whether you’re a resident of the DC area or plan to visit for the long weekend, we’ve put together the top five things to do in DC for Memorial Day 2021!

Tune in to the National Memorial Day Parade

After being canceled last year due to COVID restrictions, the National Memorial Day Parade will march through the streets of DC again this May. Held nearly every year since 1868, the very first parade departed from Arlington Cemetery to observe what was then called Decoration Day, declared by General John A. Logan who was then the commander-in-chief of the Union Civil War Organization Grand Army of the Republic.

In recent years the parade has stayed close to the National Mall, traveling down Constitution Ave NW between 7th and 14th Street. The three-hour event features processions of all of the US Armed Forces branches, their members as well as their families and loved ones, musical performances, and special dedications to the men and women who lost their lives during military service.

Historically, parades also take place in many of the country’s major cities including New York City, Philadelphia, New Orleans, and Los Angeles. While the Washington DC edition of this festivity is back this year, it is not open to the public due to lingering COVID-19 concerns. The march will be filmed for a TV special that will air on most major networks including ABC, CBS, and NBC. The American Veterans Center and the World War II Veterans Committee hope to welcome the public to the sidelines of the parade next year. It’s a great parade that makes the number #1 spot on our things to do in DC list for this year’s Memorial Day.

Ride or Rally for Rolling to Remember

Show your support at an event that advocates for military members that are missing in action (MIA) and brings awareness to the veteran suicide crisis at Rolling to Remember. This motorcycle demonstration hosted by AMVETS (American Veterans) takes the place of the relocated Rolling Thunder “Ride for Freedom” that started in 1988 to seek accountability for POW and service members missing in action (MIA). If you’d like to join on your two-wheeled ride you can register to participate.

The roaring event on Sunday, May 30 that circles the National Mall is not exclusive to those on motorcycles. You can support AMVETS’s mission by shopping at Thunder Alley on 22nd Street and Constitution Avenue Northwest. There will be several tables and vendors set up where you can shop official “Rolling to Remember” patches, pins, and T-shirts along with food and biker gear. After a stroll through Thunder Alley, you’ll be ready to cheer on the procession alongside their route.

This year’s event garnered lots of attention as AMVETS struggled to secure a staging area before taking off at 12 pm, which will now be at RFK Stadium, and is expected to draw nearly 100,000 riders. Many roads around the National Mall will be closed from after midnight on May 30 until the last rider finishes in the late afternoon. If you’re planning to visit sights while you’re in the area, it’s best to go to it on foot.

One of the country’s most prestigious burial grounds for fallen military members is a short ride outside of Washington DC. Just across the Potomac River is the Arlington National Cemetery where thousands of war heroes, freed slaves, and former presidents were laid to rest. Spend a few hours of reflection at the site on a fully guided, private walking tour by USA Guided Tours.

The expertly guided walk of Arlington National Cemetery, which stretches across over 600 acres of land, will showcase several prominent memorials and landmarks. After your group gathers at the entrance of the cemetery, you’ll make your way to Arlington House, The Robert E. Lee Memorial, then visit the gravesite of President John F. Kennedy as well as the Tomb of the Unknown Soldier, and witness the Changing of the Guard Ceremony. Throughout the entire tour, your guide will share special facts and narrate the sites.

During your tour of Arlington National Cemetery, you can also opt to explore the property on their innovative transit system operated by Old Town Trolley. Experience the historic, sprawling final resting place of some of the nation’s soldiers, dating back to before the Civil War, surrounded by a serene landscape. Walking amongst the prestigious memorials for those who have sacrificed their lives in service to the military is sure to be an enlightening and memorable way to pay homage during Memorial Weekend. This is a must if you are looking for things to do in DC this Memorial Day.

The roads around the National Mall may be closed for most of Memorial Weekend but luckily there are many war memorials and military museums that you can access by foot. Much of the sites honoring military members are outdoors and accessible free of charge. Get your walking shoes ready and explore your choice of the area’s monuments.

While some Washington DC war museums may not have reopened as a result of COVID-19 restrictions, there is still a selection that is welcoming in visitors. The Clara Barton Missing Soldiers Office Museum details the efforts of Clara Barton, who worked on battlefields and in hospitals during the Civil War, to locate over 22,000 missing soldiers after receiving over 60,000 letters from their loved ones. After a trek to the U St. district, visit the African American Civil War Museum that recognizes the efforts and achievements of the 209,145 members of the United States Colored Troops.

In between museums you can also admire the war memorials surrounding the National Mall. The World War II Memorial, complete with 24 bronze panels, engraved quotes, a fountain, and a wall of stars, honors the service of 16 million members of the US Armed Forces and the ultimate sacrifice of 405,399 American soldiers. The D.C. War Memorial displays the names of the 499 Washingtonian military service members that sacrificed their lives while fighting in World War I. A short walk away in West Potomac Park lies the Korean War Veterans Memorial. 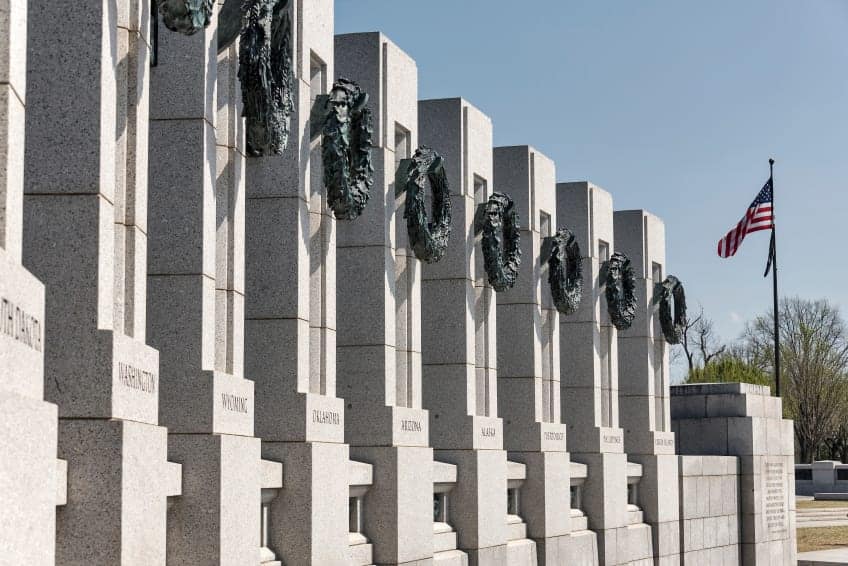 Many of these tributes to the lives and sacrifice of the nation’s military members are close together.

Map out which memorials and museums you’d like to visit before heading to the area so you can make the most of your sightseeing. It should be a breeze to visit each of the sites by the end of Memorial Day weekend.

The National Memorial Day Concert returns for the 32nd year with a televised special on the Sunday before the holiday. The longstanding performance is usually live but this year there will be a special pre-taped presentation honoring the men and women in uniform, their families back at home, and those who have given their lives while serving in the military.

The concert will be hosted by actors and activists Joe Mantegna and Gary Sinise with a special appearance by General Colin Powell. The night will kick off with a special performance of the National Anthem by Mickey Guyton. There will also be musical performances by over a dozen artists including Gladys Knight, Sara Bareilles, The Four Tops, as well as the signature showcase of the Kennedy Center’s National Symphony Orchestra. During the program, there will be tributes to the heroic American nurses from the Vietnam War, a 20th-anniversary remembrance of 9/11, and a special honor presented to one veteran family.

Even though the traditional live concert on the West Lawn of the U.S. Capitol won’t take place, you’ll have a front-row seat to the performance at 8 p.m. EST, May 30th on PBS as well as on the American Forces Network for the troops stationed around the world. The evening’s events will also be live-streamed on YouTube and Facebook.

Looking for More Than Just Top 5 Things to Do in Washington, DC?

Washington D.C. is also a dynamic cultural and historically rich city chock full of things to do. Whether you like amazing food, museum browsing, the arts, or hard-core shopping as a tourist, there are so many things to do in Washington D.C. The hardest part might be deciding what to choose.

If you are visiting Washington DC this year’s Memorial Day weekend, in addition to the top 5 things to do in DC we recommended, consider visiting the Pentagon, U.S. Botanical Garden, Smithsonian’s National Air and Space Museum, the National Museum of African American History and Culture, International Spy Museum, Washington National Cathedral, National Portrait Gallery, and the National Zoo.

Make Your List of Things to Do in Washington DC

With so many things to do in Washington DC, your hardest decision might be how to fit it all in. The city is vibrant with history, art, and culture for the many tourists who come to enjoy it.

For more information about visiting Washington D.C., be sure to visit our blog page. Also, be sure to check out our many tour options while you are in the city, and remember to stay up to date on the recommended health and safety measures to keep yourself and the community safe. 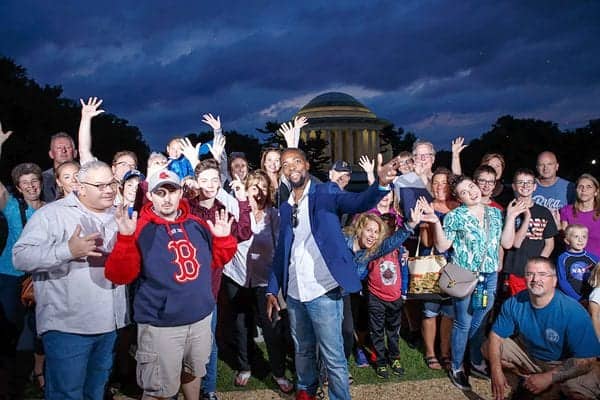 TOP
We use cookies on our website to give you the most relevant experience by remembering your preferences and repeat visits. By clicking “Accept All”, you consent to the use of ALL the cookies. However, you may visit "Cookie Settings" to provide a controlled consent.
Cookie SettingsAccept All
Manage consent