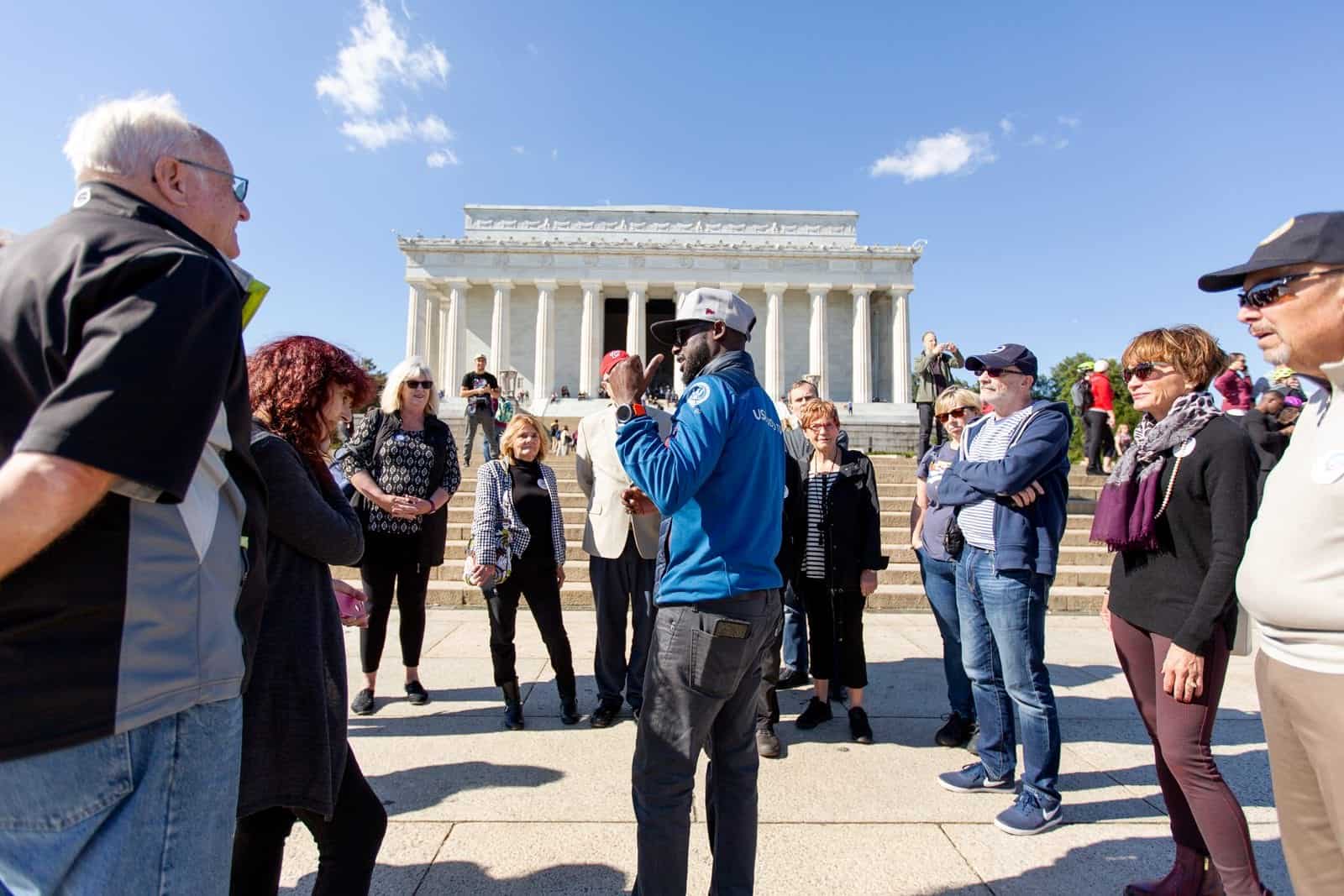 Lace-up your sneakers and join USA Guided Tours as we explore Washington, DC’s magnificent monuments on this in-depth walking tour. One of our knowledgeable guides will lead you to several key landmarks along the National Mall as well as some hidden gems. The perfect sightseeing experience for travelers who would like to explore our nation’s capital on foot, in the open, and with small groups (up to 12 people).

Your journey begins at the White House Visitor Center where you will enter for a virtual peek into the president’s home. Your guide will then walk you to the Washington Monument with reserved access to view Washington, DC over 500 feet from the ground. You will then proceed through the historic National Mall and visit numerous world-famous sites, such as the Lincoln Memorial, Franklin Delano Roosevelt Memorial, Vietnam Veterans Memorial, and more. Once complete, you will enjoy a nice walk to the Smithsonian National Museum of American History where your tour will conclude.

Stroll the historic grounds of Capitol Hill and explore the foundation of the American government with an expert guide. Your experience begins at the illustrious Neptune Fountain where you will meet your tour guide before taking a very short walk to the Supreme Court of the United States. There, your guide will provide comprehensive details of the building and its purpose. Next, you will enter the Library of Congress to observe its stunning interior-architecture and learn about its historic collection of books, exhibits, and documents.

Next, you will proceed to the United States Capitol Visitor Center to enjoy a guided walk through the US Capitol Building. In the Capitol Building, you will see the Crypt, Statuary Hall, and the remarkable Rotunda located within its famous dome. Your tour doesn’t stop there! You will circumvent the US Capitol Building for a chance to see the office buildings where Congressmen work. Once complete, you will enjoy a nice walk to the National Gallery of Art where your guide will provide details of the building and its history. Your tour will conclude at the National Archives where you will have reserved access to see the Constitution, Declaration of Independence, and much more at your leisure.

Across the Potomac River is our country’s most recognized and respected burial sites, Arlington National Cemetery. During the American Civil War, these hallowed grounds were occupied by the Confederate States Army and used as a military stronghold.

The restored Arlington House, once the home of General Robert E. Lee, stands in the center of the property. Despite General Lee’s defiance, the building is a protected memorial today due to his aid in uniting the land after the Confederacy’s defeat. Unity is a present focus of the cemetery as the monuments to the former adversaries of Lincoln and Lee sit together with the Memorial Bridge connecting them.

This enormous refuge nestled in an otherwise urban landscape is the final resting place of many: war heroes, freed slaves, even Presidents like John F. Kennedy. Famed sites, such as the Tomb of The Unknown Soldier lay on the property with other attractions the Marine Corp Memorial, Air Force Memorial and Pentagon just nearby.

On this walking tour, you will see and experience the best of Arlington National Cemetery with one of our outstanding tour guides. In addition, you can selectively enjoy access to the property’s fantastic transit system, operated by our friends at Old Town Trolley.

DON'T SEE WHAT YOU'RE LOOKING FOR?

CREATE YOUR OWN CUSTOM PRIVATE TOUR

Visit this pre-revolutionary town, set apart from the city proper, and view its historic homes and cobbled streets. From a house built in the 1760s to Kennedy’s Camelot two centuries later, Georgetown’s tales give you a sense of the famed neighborhood as well as what life today is like living in the Capital. 2 hours.

We’ll take you back in time on a story-telling walk through the sites and sounds that Abraham Lincoln would have witnessed on his final trip from the White House that fateful night April 14, 1865, to Ford’s Theatre. We do not go inside any buildings but we’ll wander Lincoln’s Washington and hear the sad tale of the Booth conspirators.

A walk through this colonial historic district following in the footsteps of George Washington, Robert E Lee, and other historic figures on cobblestone streets. We’ll talk about the history of this charming town and end at the Waterfront where you can enjoy a great seafood lunch.

ALL TOURS
BUS TOURS
POPULAR TOURS
TOP
We use cookies on our website to give you the most relevant experience by remembering your preferences and repeat visits. By clicking “Accept All”, you consent to the use of ALL the cookies. However, you may visit "Cookie Settings" to provide a controlled consent.
Cookie SettingsAccept All
Manage consent