Located on 175 Fifth Avenue in the borough of Manhattan, the Flatiron Building NYC was one of the first skyscrapers built in New York City.

A Chicago architect was hired to build the skyscraper, which would be the first, north of 14th Street. It was then named after George A. Fuller, founder of the Fuller Company, but the name Flatiron was used by locals and seemed to stick.

The building gets its name from its wedge-shaped – much like the cast iron tools used for iron clothes, before electricity.

The neighborhood around the building is called the Flatiron district. The building was designed as a New York City landmark in 1966 and a National Historic Landmark in 1989. The property sits changed hands many times before being purchased by Harry S. Black, the CEO of the Fuller Company.

Today, the building is the headquarters of Macmillan and St. Martin’s Press and its affiliates. The term “23 Skidoo” is attributed to the Flatiron building and the men who would linger on the street corner of 23rd and Fifth Avenue waiting for women to walk by. Because of the particular cross-winds of this location, it would cause the women’s skirts to fly up, showing their legs (which was racy for the time). Police officers would say “23 Skidoo” meaning to “shoo” them away from the area. 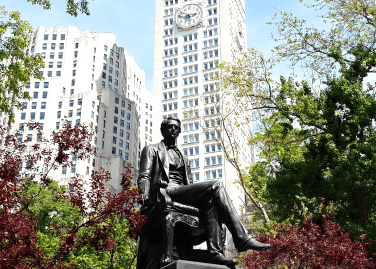 While most people are familiar with Madison Square Garden, Madison Square Park NYC is located northeast of the sports arena. It sits at the crossroads of Fifth ...