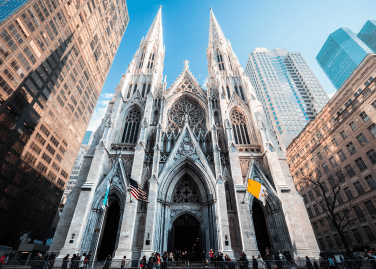 Famous for its American Gothic Revival architecture and for being the seat of the Roman Catholic Archdiocese of New York, Saint Patrick’s Cathedral Church in Manhattan is a classic tourist destination. It is located on Fifth Ave. between 50-51st Streets, just across from Rockefeller Center, facing the Atlas statue. The Diocese of New York was designated an archdiocese by Pope Pius IX in 1850, and the current building was constructed on the site of the original Saint Patrick’s Cathedral beginning in 1858.

Construction was delayed by the Civil War but continued until completion in 1879. Some of the features inside include a massive great organ (one of three organs), vaulted ceilings, an alter designed by the Italian sculptor Paolo Medici depicting Saint Elizabeth, and stained glass windows, as well as Saint Michael and St. Louis Alter (Tiffany & Co. assisted in the design).

Visitors may also view the Pietà, sculpted by William Ordway Partridge, which is a massive sculpture (three times larger than Michelangelo’s) depicting the Virgin holding the crucified Christ in her lap. The Cathedral seats about 2,200 people and holds mass daily. The exterior is approximately 405 ft. long with spires rising about 330 feet high. The cathedral is over 135 years old and is currently undergoing a five year $175 million renovation. The Cathedral will remain open to visitors and parishioners during the reconstruction. 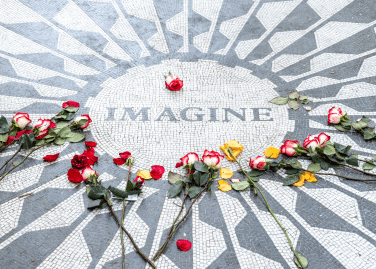 The Strawberry Fields Central Park Memorial is located on 2.5 acres in Central Park between 71st and 74th Streets. It is dedicated to singer songwriter, John ...