Located at the Eastern end of the National Mall, the United States Capitol Building is the center around which Pierre L’Enfant designed the layout of the streets around Washington, D.C. In this building, the seat of the U.S. Federal Government meets, including the U.S. Congress. The building sits on Capitol Hill overlooking the National Mall. This building was called the “capitol” instead of “congress” building because the word “Capitolia” is associated with the Roman citadel, similar to the Greek Acropolis, which is an area built upon the elevated ground and the nucleus of a city. In 1793 Thomas Thornton won a competition hosted by Thomas Jefferson, and approved by George Washington, for the design of the capitol building. The original design was modified several times by various architects to represent what it is today with the Parthenon like pillars, a large dome, and House and Senate wings. 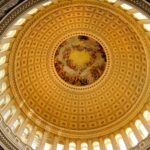 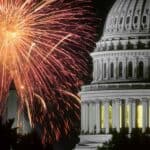 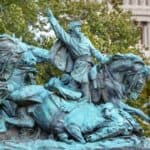