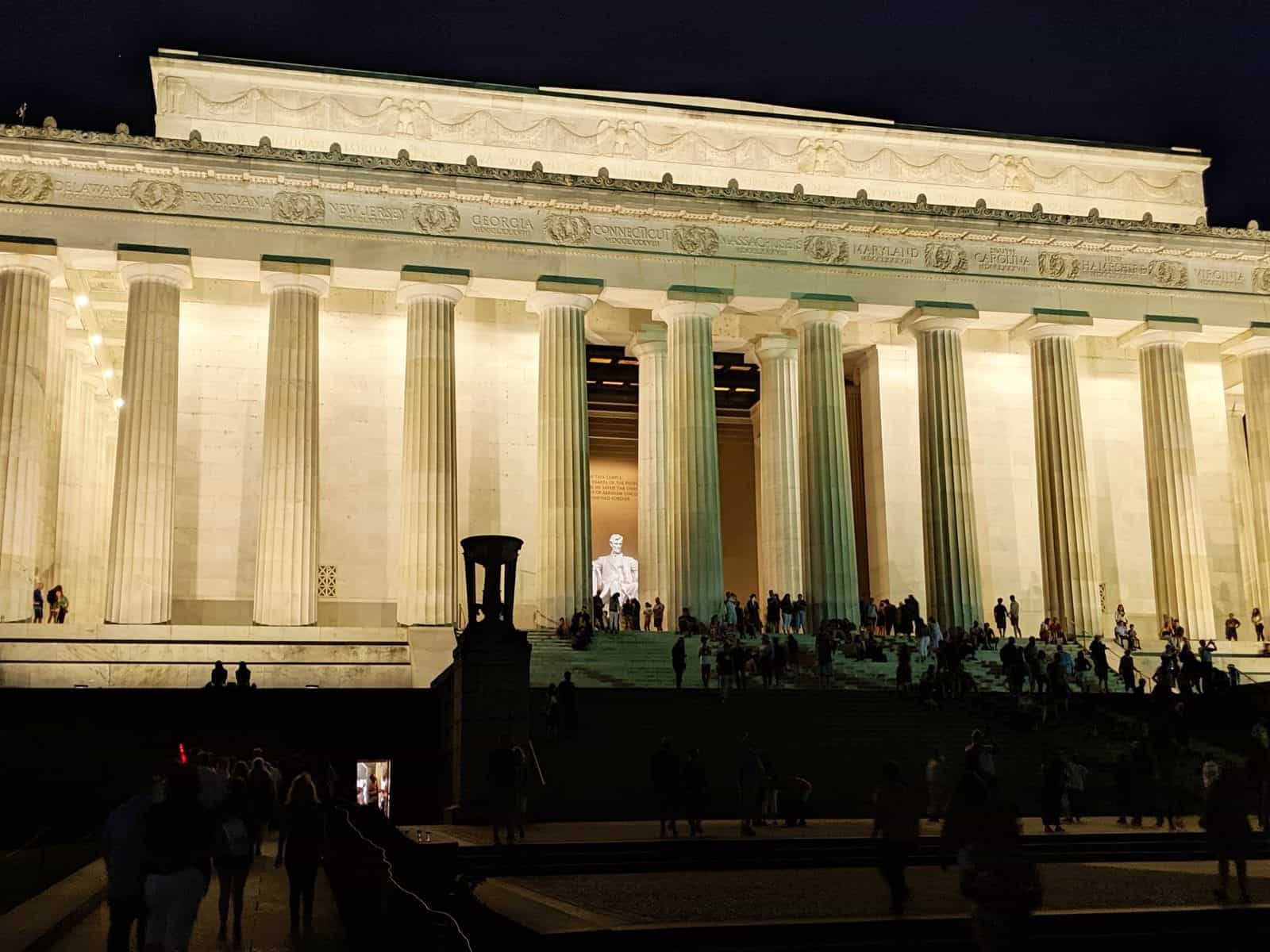 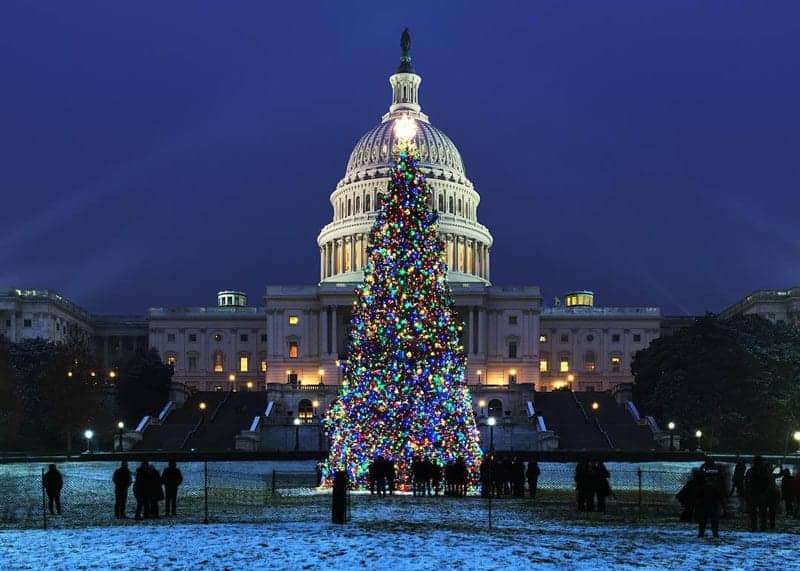 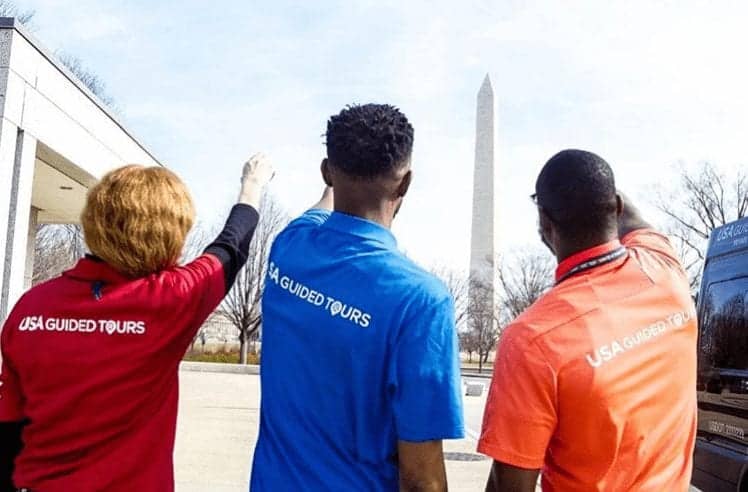 Expert Washington, DC tour guides hop off the bus at each stop to provide you with a comprehensive and more intimate sightseeing experience.

Conducted with luxury tour buses that are climate-controlled and offer comfortable and pleasant touring experience, as well as protection from weather elements. 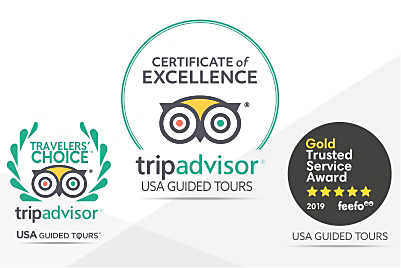 Recipients of the TripAdvisor Certificate of Excellence, the Viator Travel Award, the Travelers’ Choice Award, and the Gold Trusted Service Award!

Both last night's tour with Ralph & Ali and last week's day tour with John & Cesar were excellent. We saw more than we could have done any other way and more importantly understood more of what we were looking at!

We appreciated Nick's humor, enthusiasm, and knowledge. He made the daytime and the night tours very enjoyable!

Ralph was fantastic! He interacted with everyone in a personal way and made the tour great!

Experience Breathtaking Views of Our Nation’s Capital, Flooded with Lights!

We are committed to giving you the best touring experience possible. That is why, instead of taking tours on buses with audio recordings, we offer live tour guides who hop off the bus with you to ensure you receive an intimate and personalized sightseeing experience of each attraction.

Don't miss the chance to experience Washington, DC at night! This three-hour night tour takes you on a light-filled journey through historic Washington, DC and nearby Northern Virginia.

Your guided DC night tour begins at the U.S. Navy Memorial at 701 Pennsylvania Avenue NW - halfway between the White House and the U.S. Capitol - and will bring you a unique and breathtaking look at our nation's capital!

On your way to the White House (first stop), you'll pass the U.S. Botanic Garden, Grant's Memorial, the U.S. Navy Memorial, the Robert F. Kennedy Department of Justice, and the J. Edgar Hoover Federal Bureau of Investigation. When arriving at the White House, you'll also see the Executive Residence of the President and his family, as well as the Dwight D. Eisenhower Executive Office Building. This stop also includes a walk past Lafayette Park, honoring the Marquis de Lafayette, leader of French forces.

Moving along and on your way to the next stop - U.S. Capitol Building - you pass the National Archives, which houses historic U.S. documents - the original Declaration of Independence, the Constitution, and the Bill of Rights. In route, you will also see the Newseum, the Canadian Embassy, and the National Gallery of Art.

Emerging in sight will be the U.S. Capitol, where you'll take in a memorable, two-mile-long, panoramic view of the Smithsonian Museums (the largest museum complex in the world), and the Washington Monument (the tallest, freestanding stone structure in the world), flooded with lights – creating an unforgettable experience.

Once finished at the World War II Memorial, you will visit the beautiful Thomas Jefferson Memorial – which was built from 1938 –1943 – on the Tidal Basin, lined with cherry trees that were a gift of friendship to the People of the United States from the People of Japan.

Across the Tidal Basin, you'll visit the Reverend Dr. Martin Luther King, Jr., Memorial – dedicated in 2011; quite a sight, at night!

On the walking part of this popular Washington, DC night tour - you will visit the Korean War Veterans Memorial, and via a nice stroll along the tree line, you will emerge in front of the Lincoln Memorial and Vietnam Veterans Memorials.

On the way to the last stop at the U.S. Navy Memorial, you will, once more, be able to take in a twinkling, and spectacular view of the Washington, DC landscape.

Don't miss the chance to experience Washington, DC at night! Book today and select a closed-top or open-top/glass-top convertible bus.

The tour starts/ends at U.S. Navy Memorial - honoring those who have served or are currently serving in the Navy, Marine Corps, Coast Guard, and the Merchant Marine. See it on the map...

Located at 1600 Pennsylvania Avenue, the White House is the main residence of the President of the United States ... read more

The United States Capitol Building is the center around which Pierre L’Enfant designed the layout of the streets around Washington, DC ... read more

The National World War II Memorial is dedicated to both the civilians and armed forces serving during World War II ... read more

Dedicated to the third president of the United States and author of the Declaration of Independence, Thomas Jefferson, the memorial rests in the heart of the Tidal Basin ... read more 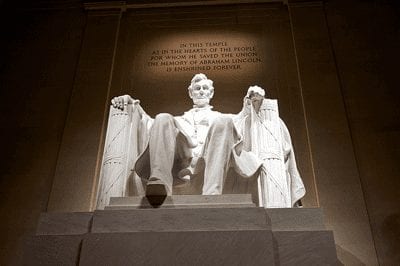 Dedicated in 1922, Lincoln Memorial houses the seated sculpture of Abraham Lincoln inside a large Greek Temple made out of Yule marble ... read more

Located in Constitution Gardens, next to the National Mall, the Vietnam Veterans Memorial is dedicated to all of those in the armed services that died during the war in Vietnam and South East Asia ... read more

Don't miss the chance to experience Washington, DC at night! Book today and select a closed-top or open-top/glass-top convertible bus.

FAQs
WHAT TYPE OF BUSES DOES USA GUIDED TOURS USE?

This particular tour gives you two options for tour buses - a luxury climate-controlled closed-top bus or a unique small-capacity (18 pax max) Mercedes-Benz Sprinter bus with a glass-top or open-top convertible roof that can open when the weather is friendly or retract and turn into a glass-top to protect you from the weather elements.

Our luxury closed-top buses can be substituted with larger 55-passenger buses depending upon demand and/or our tour schedule. We do our best to keep large, same-party groups together on the same bus.

ARE WE ALLOWED TO BRING BABY STROLLERS AND/OR WHEELCHAIRS ON BOARD THE TOUR VEHICLES?

ARE WE ALLOWED TO BRING CARRY-ON LUGGAGE ON THE TOUR VEHICLE?

Our shuttle buses and vans do not have storage for accommodating carry-on bags. We ask that you only bring purses, briefcases, or backpacks for your tour; Please note that USA Guided Tours reserves the right to inspect any bags, book bags, briefcases or backpacks you carry.

HOW LONG DO WE STAY AT EACH STOP?

It depends on the stop. Your tour guide will tell you the planned amount of time for each stop. We have allowed enough time on every stop for you to walk around and take plenty of pictures!

CAN YOU PICK ME UP AT MY HOTEL?

We have some pickup services available from selected hotels only. Please contact your concierge or call our customer service line at +1 202-733-7376.

USA Guided Tours is taking the holiday road from the Nation’s Capital to America’s Sailing Capital!

This holiday season, join us in discovering the remarkable and festive sights of two neighboring capitals: Washington, DC & Annapolis, Maryland! Before leaving DC, we see the Capitol and the National Mall. Next, we begin our ride to Annapolis, a colonial city with a lot of beauty. We’re starting off with stunning pass-by views of the Governor’s Mansion, St. John's College, Maryland Fire-Rescue Services Memorial, and more followed by a fun walking tour & delightful, waterside dinner at the historic Annapolis harbor.

Next up is the Maryland World War II Memorial with an amazing view of the United States Naval Academy beyond the Severn River. You can expect even more dazzling scenery from the comfort of our glass-top sleigh bus as we coast through the holiday lights show at Sandy Point State Park!
Book today and treat yourself with joyful and scenic memories!

TOP
We use cookies on our website to give you the most relevant experience by remembering your preferences and repeat visits. By clicking “Accept All”, you consent to the use of ALL the cookies. However, you may visit "Cookie Settings" to provide a controlled consent.
Cookie SettingsAccept All
Manage consent