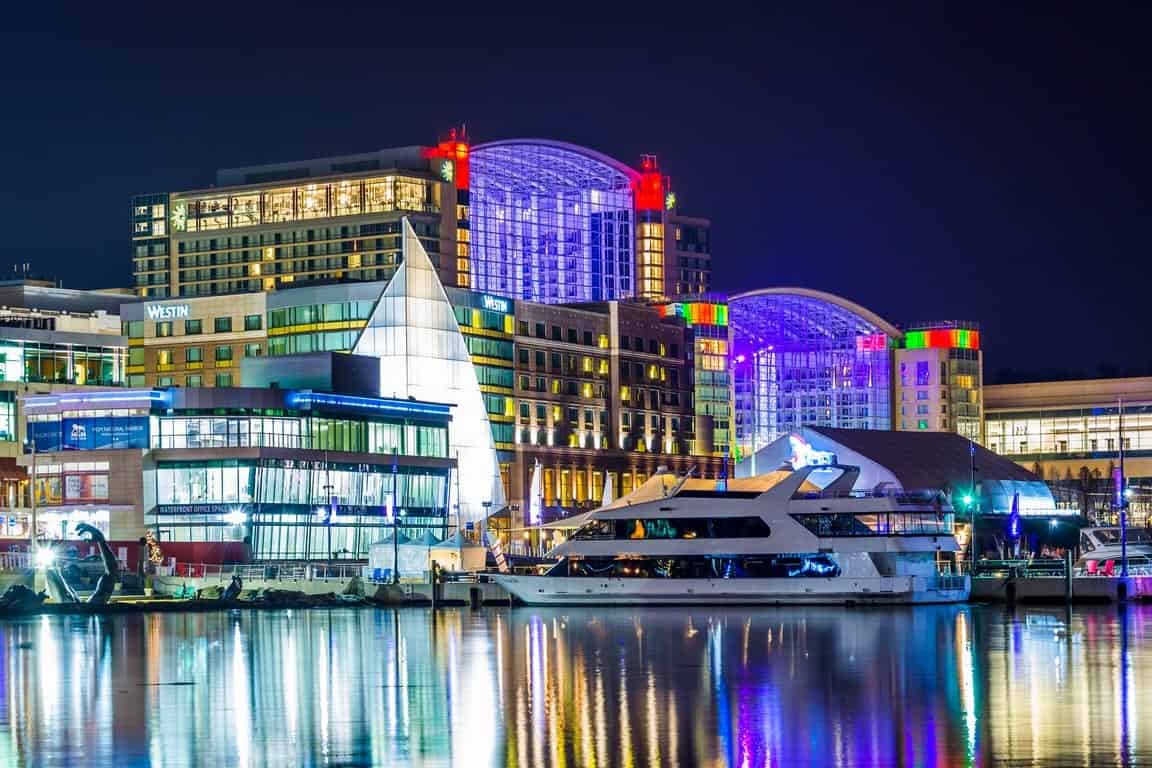 Back to blog
February 13, 2020
Link was copied to clipboard

The Washington, DC waterfront is the place to be in the Capital. A resurgence of development and design along the District of Columbia’s waterfront is attracting the city’s most exciting energy. The Potomac and Anacostia rivers are home to new bars, shopping, and attractions that are perfect for the family or a Valentine’s date.

The waterfront districts in Washington are some of the most popular in the city. These neighborhoods are family-friendly and full of vibrant activities for all ages. Not to mention, there is plenty to do for a romantic Valentine’s Day in the District. Below are our five favorite places to fall in love with the Washington, DC waterfront.

5 Places to Fall in Love Along the Washington, DC Waterfront

The recently restored D.C. Wharf is a sight to see. It brings hotels, luxury real estate, bars, shopping, and world-class music venues to the Potomac riverfront just east of the Jefferson Memorial. While you’re there, you can have a truly full night out.

First, grab some food at Mi Vida, a modern twist on traditional Mexican cuisine. Then, have a drink at the kitschy partnership of Tiki TNT & Potomac Distilling. Finally, see a concert! There are options for music venues both big or small: The Anthem or Pearl Street Warehouse, respectively. Ultimately, with almost 50 establishments under a half-mile of the boardwalk, there is a lot to see and do and it is aiming to grow even larger.

Although The Wharf’s attractions are new and shiny, the Maine Avenue Municipal Fish Market is a storied resident of DC that only needed a face-lift. It is actually the oldest continuously operating open-air fish market in the United States – first established in 1805. On the other side of the Wharf is the Washington Yacht Club, Arena Stage and the Titanic Memorial. If you’re not looking to spend money, take the free ferry to the Hains Point section of the National Mall. It is home to the oldest mini-golf course in the country!

The Capitol Riverfront is home to Washington’s historic Navy Yard, The Nationals ballpark, D.C. United’s Audi Field and tons of new mixed-use developments known collectively as The Yards. Along with the thousands of new residential units, this area has become a center for massive commercial development. Many of Washington’s biggest businesses have left the Central Business District, otherwise known as Metro Center. They find less traffic, more space and newer amenities in the quickly growing waterfront.

“The original Navy Yard, which dates back almost to the Revolutionary War days, was a shipbuilding and munitions building plant for the Navy. It was substantially expanded to support the needs of the Navy in World Wars I and II,” Brookfield Properties’ Peter Calkins told WTOP.

On the still-operational military base is the National Museum of the U.S. Navy. Guests may visit the museum but must bring a government-issued photo-ID. International visitors require a passport. North of the Navy Yard, are the active Navy Barracks in the Eastern Market area of Capitol Hill.

Scores of new dining options surround The Yards Park. Waterfront features like ice skating in the winter and relaxing in the summer are very popular. Bars like that in the massive District Winery are popular for happy hour. The Half Street Fairground is a must-see for events like the food truck festival and after Nationals games. Other attractions like the New York Trapeze School scatter the area where you can learn the circus arts. It is fun for all ages!

The other side of the Washington, DC waterfront is the community along DC’s lesser-known river: the Anacostia. The re-made 11th St Bridge pedestrian walkway connects the Washington Navy Yard to Anacostia. Anacostia is a vast section of D.C. on the eastern side of the river that shares its name. It will soon be home to a continuous 20-mile walking trail that circles that Anacostia River on both sides.

This beautiful Riverwalk Trail is nearly complete. It will connect the Capitol-side riverfront parks to the stunning Kenilworth Aquatic Gardens nearly 10 miles away. Since 1926, the Gardens welcome thousands of visitors for its famous water lilies and bird watching. This overlooked section of the National Parks is a must-see.  If you’re not up for the walk, you can take a short uber ride from The Yards!

In the downtown area of Anacostia are many attractions. The Anacostia Arts Center is a mixed-use community space with food and large performance space. The Anacostia Playhouse is a popular site for local theater. You can also visit Abolitionist Frederick Douglas’ historically preserved house and the Smithsonian Anacostia Community Museum. The Smithsonian recently reopened after a large renovation. Though overlooked by tourists, Anacostia is definitely worth a visit.

Of course, we can not talk about the Washington, DC waterfront without talking about our National Memorials. The National Mall is likely the most popular destination to visit when traveling to the Capital Region. Many tourists don’t realize how large the National Mall & Memorial Parks really is. Along the river, however, there is so much to see.

The iconic Lincoln Memorial sits along the Potomac River across from Arlington National Cemetery in Virginia. Lincoln’s memorial sits at the end of a nearly 3-mile stretch stemming from the Capitol. This downtown landmark is a fraction of the 1,000+ acres in the collective Memorial Parks.

The Jefferson Memorial sits as the barrier between the Potomac riverfront and the man-made Tidal Basin. It offers beautiful views of the city. The famous Cherry Blossom trees line on the Washington, DC waterfront is a part of a much larger gift by the Empire of Japan in 1912. We celebrate these trees and their history every April.

A small island in the Potomac River expanded to become Hains Point when the Tidal Basin rerouted much of the river’s flow. We named this new peninsula after the engineer in charge of the project. This park is home to the tennis courts, the East Potomac Golf Course and excellent fishing spots. A free ferry brings you The Wharf across the Washington Channel. Additionally, the waterside path and fields near the FDR Memorial offers views of both the Pentagon and the National Cemetery. Fun fact: those fields were once an air force strip where the Postal Service first delivered mail by air!

Probably the most well known on this list is the historic neighborhood of Georgetown. Nearby is the university of the same name and a number of boutique shops and restaurants. Georgetown is actually the oldest neighborhood in the District of Columbia. Originally, the District was home to three cities. One from Maryland: the vibrant colonial town of Georgetown; One from Virginia: the bustling shipping port of Alexandria; and one new, a federal center that became known as Washington. The status quo remained for decades until the Civil War hit and a portion of D.C. gifted from Virginia was taken back.

Today, Georgetown offers shopping along the beautiful M St. You can find tourist sites like the Exorcist Steps (filmed for the famous horror film) and amazing waterfront restaurants like Farmers, Fishers & Bakers and Baked & Wired. Additionally Georgetown Harbor, along the Potomac riverfront, you can ice-skate or in the summer rent kayaks and canoes at one of many boathouses. At the nearby and infamous Watergate Hotel is a renovated rooftop bar where you can ice skate in the winter and swim in the summer. Remember to stop by the Kennedy Center, our national arts center, for a free show every day at 6 pm!

There is truly so much to see along Washington, DC’s up-and-coming waterfront from memorials, to restaurants and more. If you are looking for a local perspective when exploring around Washington, look no further than a tour with us at USA Guided Tours! Our National Mall tour offerings depart every day and are available in a variety of lengths for everyone’s schedule. Additionally, we can create private tours for groups both big and small. We are excited for you to see all the Washington, DC waterfront has to offer.